CHICAGO — October 23, 2019 — NAMA, with the support of the Partnership for a Healthier America and the Alliance for a Healthier Generation, announced today that it has adopted a public health commitment to substantially increase the percentage of ‘better for you’ offerings to 33% in the nation’s vending machines.

The commitment, implemented over the next three years, represents a nearly 40% increase over current levels of ‘better for you’ offerings – those that meet at least two recognized public health standards.

“There are nearly four million vending machines serving snacks and beverages every day, 24/7, across this country,” said NAMA CEO Carla Balakgie. “Vending is everywhere consumers work, play and live and NAMA regards this initiative as a bold, ambitious, and meaningful step to meet the growing consumer demand for healthier choices.”

Balakgie made the announcement today in New York City at a special briefing where she was accompanied by leaders from the convenience services industry, as well as representatives from the Partnership for a Healthier America and the Alliance for a Healthier Generation.

“Our fundamental goal is to make healthier choices accessible to all,” said Nancy E. Roman, CEO of the Partnership for a Healthier America. “We applaud NAMA and its members for their efforts with this commitment and we look forward to helping to make it a success.” Partnership for a Healthier America will collaborate with NAMA on the measurement and evaluation components of the public health commitment.

Five Star Food Service is proud to be a founding participating operator in the commitment for public health.  Read the full press release here. 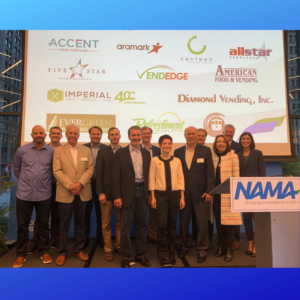 Previous Article
Next Article
Find Your Service Area
Get A Quote